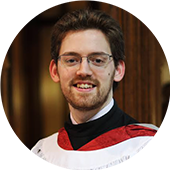 Peter Siepmann has been Organist & Director of Music at St Peter’s since September 2007, following five years as Music Associate.

He was educated at St Edward’s School Oxford and the University of Nottingham, where he was awarded a doctorate in 2010.  As a conductor, accompanist and continuo player, Peter has performed many of the major works of the choral repertoire with choirs of all sizes, both on the concert stage and in a liturgical setting.  He became conductor of Nottingham Bach Choir in September 2019.

Alongside his work as a conductor and organist, Peter is an Examiner for ABRSM and an experienced teacher; he taught for several years in the renowned department at Uppingham School before moving to Repton School where he is currently Head of Academic Music.

Peter is a Fellow of the Royal College of Organists, and a number of his organ pupils have gone on to cathedral and university scholarships.